I glide through hordes of homeless who congregate in the dirty urban streets, surrounding their unwary prey like zombies who shuffle quietly, discreetly decreasing the radius from several yards to a few feet before attacking, and by then it’s too late for the pair of unsuspecting ladies with their fancy leather purses who don’t realize that they’re surrounded until they hear the dreaded mantra “spare change?” but fortunately they “plead the plastic” and incredibly, Romero’s extras seem to buy that fib about their quarry having nothing but credit cards and grudgingly disperse, but of course they’ll be back the next night, or even the next hour and will approach the same pair of pedestrians if the latter are foolish enough to stay in the area.

We call them “homeless,” but of course they’re not really homeless; their home is every big city and even a few small cities and towns, but most of them hang their hats, if they have hats, in Philadelphia or Detroit or Los Angeles or New York, so how can we say they’re homeless when a park bench can accommodate two or three sleepers, bundled close together, which is good for keeping them warm during the winter, especially if you don’t have blankets?

Some of them have eyes full of desperation or fear, some are angry, but the rest project resignation and apathy and although there are plenty of shelters, they don’t want to come in from the cold so to speak because they don’t trust their own kind and why should they? I don’t trust them, either, no matter who they are, and most of them are middle-aged black men, and a few women of different racial tones but never any children, I never see any children no matter what the statistics tell me, lies, damn lies and statistics.

I see a certain white guy from time to time who looks borderline normal, if I can use that term, although he is a bit scruffy, and if you see him enough you’ll pick up on the fact that he always wears the same clothes but oddly, and this is really odd, he doesn’t smell. He stations himself outside a small Korean grocery along Spring Street and mumbles the mantra at every third or fourth passerby who usually pretends not to hear him and every so often he ambles into the Korean grocery and swipes a bottle of soda the proprietors pretend not to notice because they figure that he’s part of the cost of doing business in the city, and they don’t want all of the homeless advocates, who themselves would never adopt a homeless individual, to get all bent out of shape. This guy never says anything to me, though; he knows that it would do no good.

I walk at a normal pace, past the undead mendicants, remembering all of the good things I’ve been blessed with, although my business is gone and Ruth went with it and a lot has changed for me but then again, a lot changes for everyone. My ninth-grade math teacher told the class on our first day of school that there were three constants in life: death, taxes (Wow! Big surprise there!) and change. But Mr. Eastman is long dead, and I don’t know where my fellow ninth grade math students are; they could be anywhere, but I have a good idea where I’m going – Get out of the way, you lousy panhandler! You know better than to ask me! – but I’m kind of reminded of a song from a Lerner and Loewe musical, “Paint Your Wagon:” Where are we going? I ain’t certain! When do we get there? I don’t know! All that I know is I am on my way!

I spot one of them lying on a sewer grate, a grate spewing ample steam, which I guess is why he chose it on this chilly February night, so I stop and give him a swift kick, not a hard one, and then I deliver a second booted assault and he gives me a dirty look, but one that says “Damn you,” rather than “Let’s fight!” so he hauls himself up, straightens his trench coat, and moves on. I’m tired and my feet hurt, so I settle down on the grate – my grate now – and go to sleep. 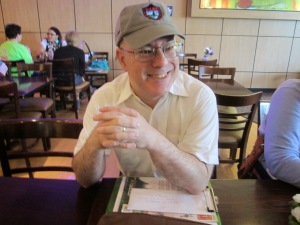 Allan M. Heller is poet laureate of Hatboro, and his work has appeared in Mad Poets Review, Mobius, Writer’s Digest, Brevities, The Compass, and Plainsongs. He is also a published short story writer, author of five non-fiction books, and a collection of short stories, 40 Frightful Flash Fictions.